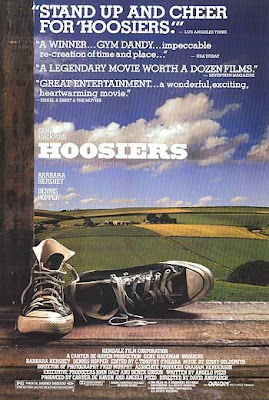 Ask anyone what is the greatest sports movie of all time and I can almost guarantee you people will say Hoosiers starring Gene Hackman. You might get a few who mention Remember the Titans, Rudy, or even Slapshot but trust me Hoosiers is the king of them all! Why? Because it's the most conservative of them all!

Gene Hackman plays the role of early 1950's basketball coach Norman Dale. He takes a high school coaching job in tiny Hickory, Indiana at the request of his long-time friend and the school principal Cletus (Sheb Wooley). The small town of Hickory, who passionately loves its basketball team, is also very suspicious of their newest resident. Instantly, coach and town clash at a barber shop meeting over a simple discussion of zone and man-to-man defense.

Even worse the undisciplined Husker players don't embrace Dale's tactics during practice and it shows in the first few lopsided games. The town's fury begins to boil but Dale refuses to change his coaching style, though he’s in desperate need to scout opposing schools.

Looking for anyone in the town for help, Dale finds "Shooter," played by Dennis Hopper. The once hoops star now turned town drunk, Shooter knows Indiana basketball like the back of his shaky hand, but Coach Dale needs him on the bench...sober.

Finally working together, the Huskers make it to the Indiana State Championship Game! Town and team are reunited because of one man's refusal to be a wussy.

Now Dale could have compromised. He could have kept the old guard from the coach before, made everyone happy. A kinder, more gentler Hickory, been a real push-over. Instead, he laid the law down and did it.

Opening scene from the movie...

Cool! I'm off to the library!

I remember seeing this movie in the theatre as a little kid. Afterwards, I couldn't wait to get home and shoot baskets with my Dad.