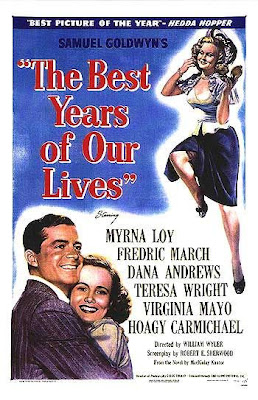 A friend of mine suggested that I rent this movie and I had one hell of a time finding it! We have 2 Blockbusters where I live and neither one had a copy! "We don't carry old films no one's heard of," some pimply face kid at Blockbuster told me. Finally I found the DVD at our local Hollywood Video and on the front it says "Oscar Winner for Best Picture 1946." Well, I thought, someone must have heard of this film and trust me when I say it didn't disappoint! Great flick! Again here is a synopsis from Internet Movie Database.

At the end of World War II, a soldier, a sailor and an airman return to their home town of Boone City and must re-adjust to the society they had left several years before. Al Stephenson was a banker before joining up. He is older than your average war veteran and gets home to find that his children have grown up and faces the difficult task of re-establishing an intimate relationship with his loving wife. At work, Al is promoted but now finds it difficult to be the hardhearted banker he seemingly once was. Fred Derry was an Air Force Officer and Bombadier but realizes on his return that he has no marketable skills and finds himself in his old job at the pharmacy working as a soda jerk. He also finds that he had married in haste and that his wife, whom he'd only known for a few weeks when they married during his flight training, isn't quite as enamored with him now that he's out of uniform. Lastly, there is Homer Parrish who lost both of his hands in a shipboard fire. He's become quite adept at using the prosthetics the Navy has provided him but resents the pity he sees in others eyes. He had hoped to marry his childhood sweetheart but is no longer sure he can burden her with his own physical limitations. All three men become fast friends and with Fred Derry's marriage falling apart, he finds himself falling in love with Al's daughter, Peggy. In the end, all three finds ways to move forward with their lives.

I have to admit I take freedom for granted way too much. I have the freedom now to sit here and update my blog to be seen by millions of visitors each and everyday (I wish). And this is all made possible by the sacrifices of men and women right now and days before. There is a strong conservative message with The Best Years of Our Lives...take care of the people who take care of you! How? Click these links to do your part! The Fisher House and My Soldier

Ah, you've just got to love one of the old black and whites.

Gotta be in the mood, though!

Good stuff, wasn't it? Back when America knew what she stood for.

A terrible price was paid for us to be free, and it has almost been forgotten.

Brooke: It's a really good film; trust me you'll be in the mood!

asm826: Thanks for suggesting this film! You're right the price is high to protect freedom.

That first clip really speaks to us today, doesn't it?

I've seen The Best Years of Our Lives, but not since the present war in which we're engaged. Thanks for the reminder.

Glad you enjoyed it!