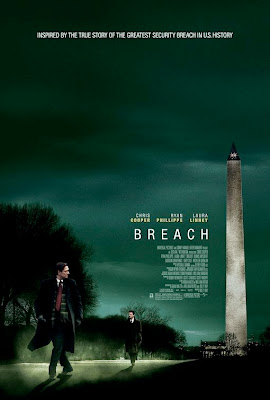 I remember going to see this movie with my Dad and Uncle and it was sold out. So we (or I should say I suggested) went to see Norbit instead. Take my word for it... 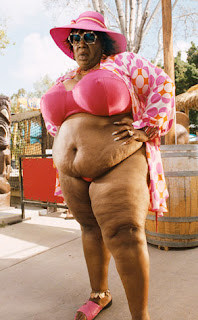 Breach is based on the true story of former 25 year veteran FBI Intelligence agent Robert Hanssen (Chris Cooper). In December 2000, Hanssen, one of the best Intelligence agents at the FBI, was reassigned to the Washington D.C. FBI Headquarters to head up a new division to protect all the FBI's classified information. Eric O'Neill (Ryan Phillippe) is a young surveillance and computer specialist who hopes to become an FBI field agent one day. Eric is recruited to his dream job in Intelligence at FBI headquarters to clerk for Robert Hanssen. Eric soon finds out why he was really assigned to work for Hanssen. Hanssen is suspected of being a traitor and selling American secrets to the Soviet Union for years. Eric must discover Hanssen's secrets and bring them to the light of day, before more damage is done to the security of the United States.

Here is the trailer from the film.

I'll bet you wish you could get those two hours of your life back!

I'm going to have to check out Breach. Thanks!

Norbit I guess is an acquired taste... next to eating poo!

lol..ty for the tip Edge!

Thanks for the heads up, and thanks for commenting over at my page!!

No problem Don, thanks for the visit too. I enjoy your page.

This movie was so good!
I just love Chris Cooper.

I cannot fathom how/ why someone would do what Hansson did for 20? years. Can you imagine that many people working that hard to bring him down? How sad. 23 hours a day in solitary confinement. I'm thinking it was a life sentence. Wow.
Was it for the money?
He stated it was to show the US how weak our security was. Nah. It was his ego.
anyhoo. I'm rambling.

I saw this movie but came away with the overall impression that it hugely disrespected religion and the role of it in a man's life. There was no doubt that the spy's Christian religion was portrayed deliberately as an essential part of his flaw. Saw nothing "conservative" in this film at all.

I was under the impression that his religious beliefs in the film were a cover, and that he was actually a non-believer. Try to remember this guy was spying for the unholiest of unholiest...the Soviet empire. Also remember, at the time and even today the left adore the communist beliefs. I will admit religion could have been portrayed well in the movie, but I'm you and I can agree that because one says he's a Christian doesn't exactly mean he/she is.