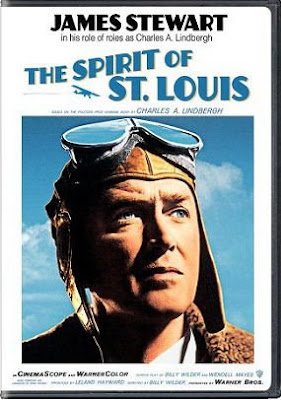 Here's a cool movie fact! James Stewart was 47 years old when he played the part of Charles Lindbergh in the movie The Spirit of St. Louis. The real Charles Linbergh was 27 when he made his memorable flight!

Why did this movie make the ECM movie of the week? When presented a challenge, Americans never quit! The very thought of a plane making a trip from New York to Paris was unthinkable! But leave it to American to lead the way with guts, smarts and even a little faith! Interestingly, Lindbergh during the better part of the film, was portrayed as a non-believer. Read the text from the movie below...

Father Hussman: How come I never see you around church? You don't believe?
Charles Lindbergh: Well, yes, I believe. I believe in an instrument panel, a pressure gauge, a compass, things I can see and touch. I can't touch God.
Father Hussman: You're not supposed to! He touches you!

Here is a brief movie summary from IMDb below.

Biography of Charles Lindbergh from his days of precarious mail runs in aviation's infancy to his design of a small transatlantic plane and the vicissitudes of its takeoff and epochal flight from New York to Paris in 1927.

This a cool flick, especially for you flyers out there! You won't regret this one!

Here is some REAL footage of the flight!

what an amazing man he was. when i was in third grade he came to our school for career day - he was "working" for pan am at the time - invited by his great nephew (or niece) or something. he spoke for what seemed like a very long time, but was probably only 10-15 minutes.

thanks for the reminder, edge!

We're goin way back for this one. It's a good movie so I hope you have the chance to check it out soon!

Thanks for the post and your interesting story. That must have been a complete thrill to meet him. It's sad that so many kids (and adults) today can't appreciate what he did.

I hope you have had a chance to see this! I think Stewart did a great job portraying him, but a lot of critics said he was just too old! I say if Jimmy Stewart's in it...it's a darn good movie! :O)

Of course, I am partial to Jimmy Stewart, so I think that I've seen every film he ever made.

not only have i seen it, i have it on dvd. anything flying and i am soooo there!

Never seen this one, EDGE. Thanks for posting it. I do love Jimmy Stewart, though.

edge - i ran into another movie reviewer the other evening while flitting about the blogosphere who said to drop the name of a movie at his site and he'd review it - now i cannot remember where i ran into him...must backtrack...

good to see you out and about!

I'll have to look this one up, too.

I guess you've seen The Right Stuff, also on ECM!

If you have a chance forward him my blog!

You'll like it, even if Stewart's voice gets on your nerves :O)