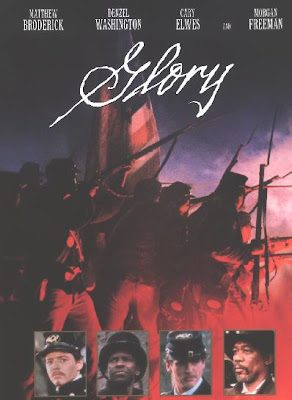 What would they say today? What would the men of the 54th, the first black Army regiment who fought to the death in the Civil War, say about American blacks today? Would they understand the young? Would they support the leadership of the Jesse Jackson's and Al Sharpton's of the country? Would they endorse a man like Barack Obama?

But why is Glory a conservative movie? Picture yourself in a country (your country) that despises you for whatever reason. They are at war with a country that wants to enslave you and others like you. Your country reluctantly and desperately creates a regiment for people like you (and only you) to fight! Despite being rejected by other troops because you are different, you fight in many terrifying and hideous battles. Why? Because you believe in your heart that despite its shortcomings, YOUR COUNTRY is worth fighting and dieing for.

Anyway you slice it folks, Glory is the Edge Conservative Movie of the Week! Here is a great movie review from IMDb.

Easily the best Civil War movie ever produced, and among the front rank of all war movies. Filled with memorable and moving scenes - the look of sheer defiance on Trip's (Denzel Washington) face as his already scarred back is whipped, the men of the 54th telling their stories around the campfire on the eve of battle, Shaw (Matthew Broderick) turning loose his horse on the beach before Ft. Wagner. History is brought to life more vividly in this film than in any big-budget all-star cast epic I can recall. Most often , those films only succeed in collapsing under their own weight and leaving audiences more turned off about history. Glory brings the issues of the time - slavery, freedom and sacrifice - down to human scale. We can understand why the men of the 54th were willing to take up arms, and how tragic it was that they had to sacrifice their lives in order to be considered men.

Here is the trailer to Glory.

Great pick, Edge. I am in agreement with your assessment here. It's hard to not like a movie with Denzel or Morgan Freeman. They are both actors with a lot of class.

Edge: I saw Glory at the theaters back in, what, 1989? To this day I'm in awe of all of those fighting for what was right, the blacks who had faced oppression but knew they could earn freedom and pave the way for others, and also the whites who knew that to push for equal treatment was the right thing to do.

This is truly a conservative movie, because it stresses enduring values and fidelity to the basic promise of our original creed.

Excellent movie. I agree with you completely, EDGE.
This makes me want to see it again.
Hey, I thought of you when I signed up for Ne t Flix today!

Oh, and Denzel, truly one of my favorite actors.

a tidbit about him that I heard recently: He's a Christian...and he rewrote the ending for Training Day...so that his character met the fate he deserved. In an interview, he stated that as a Believer, he couldn't be in a movie that allowed evil to go completely unpunished. Neat, huh?

Thanks, Edge. I went to NetFlix and added it to my queue even before watching the videos. I think I've seen it before, but if so, it is truly worth watching again.

MAN, edge...that paragraph about these guys fighting hard for this country which had rejected them in so many ways got me crying, I swear! Some movie review..that has to be a first!

I'm putting this on my NETFLIX list TODAY. Thanks....more crying to do once it comes, I'm sure!?

GREAT review, you're such a patriot, I love knowing you even in this little way.

I love this one; it's in our library!

Yah I like those guys too! Wish they would star in more stuff together.

Thanks for the kind words. A lot of libs I'm sure would call this one of "their films" but the message of conservatism is too clear. Thanks again!

Denzel has a lot of class! He made a large donation to the Fisher House, a charity for our vets I totally support! Check it out sometime.

That is pretty neat about his character in Training Day too!

Oh yah, it's worth watching again! Good stuff! Thanks for dropping by!

Well I love knowing Patriots like you too! Glad you liked my review, it's a true classic movie!

I've gotta another good one for next week, I bet you haven't seen! ;O)

I've never seen this film. I wonder...Does Netflix have it? I'm going to check.

Aha! Netflix will stream it. Or I can get the DVD for better picture-quality.

I wanted to thank you for coming by my blog and leaving a comment. I wasn't sure I wanted to write the post. But I knew I needed too. I just get so sick of the "Your hands are full" like it is a bad thing...
Thanks again.....
Mommy of 5

I really need to check out NetFlix! You're really gonna enjoy this one! The more I think about it, it may be in the top 5 greatest war movies ever made!

Always glad to "see" you! I hope you are feeling better! You certainly are blessed with wonderful kids!

I've seen it twice, loved it.

It's good stuff isn't it?