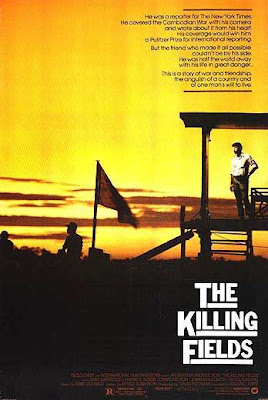 This week I present you with the great anti-commie film The Killing Fields! This film does a little Nixon-bashing here and there, but all in all it's a good film, with a pro freedom and pro conservative theme! If you ever wanted to witness and understand the viciousness of the Khmer Rouge, this is the film to watch! A special thanks to Kevin at Amboy Times for the tip!

Here is the plot from IMDb...

Sydney Schanberg is a New York Times journalist covering the civil war in Cambodia. Together with local representative Dith Pran, they cover some of the tragedy and madness of the war. When the American forces leave, Dith Pran sends his family with them, but stays behind himself to help Schanberg cover the event. As an American, Schanberg won't have any trouble leaving the country, but the situation is different for Pran; he's a local, and the Khmer Rouge are moving in.

The Khmer Rouge, what a great bunch of folks. Be warned, pretty disturbing video.

I have seen it. It's awesome.

This is a great movie I remember seeing it back in the day...still in high school that is. oi. :)N

I must see this. I can't believe I don't know more about this important part of history.

Thanks for the link Edge.

The version of this movie that includes the commentary of Roland Joffee is the version to watch; it tells so much more than just the movie itself. This movie is a classic and should be watched from time to time to remind us of unwinable wars and how we *have* forgotten...we always do. Todays "children" really need to watch this.