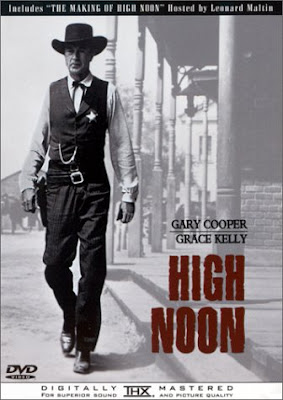 Even your superior conservative movie guide can make a mistake every once in a while, and I made a big one. About the time I started this blog, I reviewed a John Wayne film titled Rio Bravo. In the review, I compared this movie to High Noon and blasted the Gary Cooper classic as a "liberal film". In fact John Wayne, who was friends with Cooper, told him personally that High Noon just didn't have a great American story. Wayne believed the town in High Noon should have supported their sherrif and fought with him, which I agree.

However when you watch this film, keep in mind today's events. Here is the plot for High Noon from IMDb...

On the day he gets married and hangs up his badge, lawman Will Kane is told that a man he sent to prison years before, Frank Miller, is returning on the noon train to exact his revenge. Having initially decided to leave with his new spouse, Will decides he must go back and face Miller. However, when he seeks the help of the townspeople he has protected for so long, they turn their backs on him. It seems Kane may have to face Miller alone, as well as the rest of Miller's gang, who are waiting for him at the station.

With the election coming up I find this movie NOW a fitting tribute to George W. Bush and the War on Terror, especially when you watch the final scene (below) with Cooper after he shoots Frank Miller and embraces Grace Kelly. I love Cooper's expression at the end.

It says to me, "I fought all your demons. I protected you with my own life. And still you despise me. Good luck with your new Sheriff."

Well...we might need more than luck if Obama turns out to be our new protector in my opinion.

I am proud to say High Noon is the Edge Conservative Movie of the Week!
Posted by EDGE at 11:15 AM
Labels: 1952, gary cooper, high noon, united artists

It is a good movie and I like your analysis too, Edge. Although I've seen it before, I believe I'll rent it again. Thanks!

It's been a long time since I've seen that one.

It's a great film, I'm with Gayle for renting it again.

Wayne believed the town in High Noon should have supported their sherrif and fought with him, which I agree.

What you and The Duke are missing is that Cooper was obviously The Law in a Blue town.

I just caught this about 3 weeks on TV and was so glad I did.

I love your comparison of Cooper and Bush and why. excellent, edge..... But, while Cooper rides away with the Mrs., I'm fearing when Bush rides away with his, the town will be in flames behind him. Figurative, at least.

Part of conservatism is doing what is right, even if you must do it without support and alone.

Looks good going to get it on netflicks

Brooke has a good point.
It seems that conservatism is just not as sexy as liberalism. Probably never will be. OH WELL!!!
:-)

...sexy in the MSM sense of the word. Ya know. Sexy in the 'I'm an idiot and I do what the people on MTV tell me to do'.

Absolutely one of the best movies that I have seen and I have seen many, at least up until the past 15 years or so when all the "real" actors died and we were left with no talent, egotistical, overpaid idiots.
I think the comparison of Kane and Bush is pretty much right on but as another poster stated the town will be left in flames should the "new sheriff be Obama. The town will burn as it did in the old Clint Eastwood movie where he defended the town while the residents cowered in fear and cowardice and then he too rode away into the sunset . Maybe you can clue me in on the name of that movie since my memory on movies is not what it once was.

And how it to paraphrase?