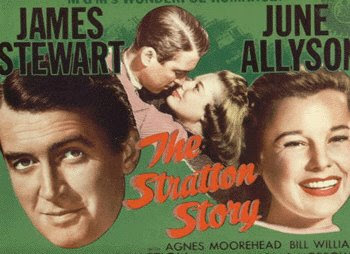 OK, OK...I admit it. The timing of this movie (especially when you consider the Plaxico Burress entry below) is a little strange. But mark my words when I say this...Plaxico Burress is no Monty Stratton!

The movie is about Chicago White Sox pitcher Monty Stratton (Jimmy Stewart), who in the 1930s, compiled a 37-19 won-loss record in three seasons. After he became the winningest right-hander in the American League, his major league career ended prematurely when a hunting accident in 1938 forced doctors to amputate his right leg. With a wooden leg and his wife Ethel's (June Allyson) help, Stratton made a successful minor league comeback in 1946, continuing to pitch in minor leagues throughout the rest of the 1940s and into the 1950s. (From IMDb)

I like this movie, of course if you've been a fan of this blog for awhile, I like just about every Jimmy Stewart movie. The Stratton Story is a great example of American courage and triumph.

This is one of my favorite classic baseball movies - right up there with the Gary Cooper one about Lou Gehrig.

I like it too, every once in awhile Hollywood gets in right!

I've seen it too. There are a lot of great baseball movies actually.

Ronald Reagan tried to get the role of Monty Stratton over Jimmy Stewart.
Was it Reagan's background in sportscasting that made him want this part? Or was it the praise he won seven years earlier playing another amputee in Sam Wood's "King's Row"?
Also, check out the dialogue. This is the first, but certainly not the last Stewart/Allyson pairing where you'll hear a perplexed June sigh: "Honestly!".