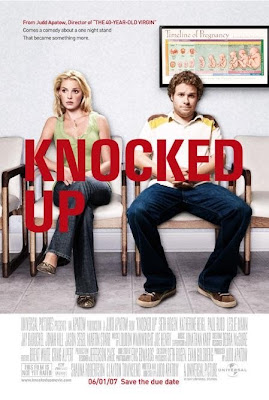 What's interesting about this crude comedy is that it's a pro-life movie! How'd that happen? Hollywood producing a pro-life flick? What's going on here? Well, let's lay off showing this movie in Sunday school, shall we? This is definitely not a film for the lil' folk, but grown ups will have a good laugh and watch a good story too! Here is the summary from IMDb...

When Alison Scott is promoted in E! Television, she goes to a night-club to celebrate with her older married sister Debbie. Alison meets the pothead reckless Ben Stone and while having a small talk with Ben, Debbie's husband Pete calls her to tell that their daughter has chicken pots. Debbie leaves the place but Allison stays with Ben, drinking and dancing along all night; completely wasted, they end up having a one night stand. Ben does not use condom and eight weeks later, Allison discovers that she is pregnant. She calls Ben and they decide to try to stay together and have the baby. However, Ben needs to grow-up first to raise a family of his own.

Abortion is an option, but the two choose life! And folks, when a film chooses "life" that's an Edge Conservative Movie of the Week!

"ray" was in the $4.00 bargain bin today at walmart - i love ray charles and jamie foxx so that's our fare for this evening or tomorrow - especially since we're going to be iced in and the kidz have no school!

Ray is a good one Nanc! I'll have to keep that one in mind!

Lord, please be with the starving pygmy kids. ;)

I hope you like this kinda of humor...I think you will!

C'mon Angel! You can put the halo away for a few hours!

this is a funny movie. i saw it in the theaters, and can honestly say that i have not laughed so hard in the theaters before, until step brothers. oh dear, that one might not make it to edge's movie of the week, but hey, the family that fights together stays together, right? hee hee hee