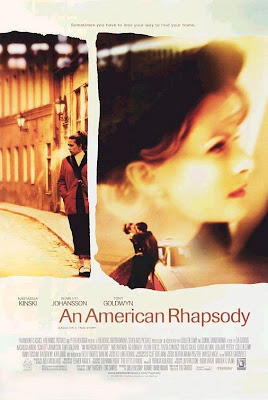 This has to be one of the best movies I've seen in a long time folks! Not only does An American Rhapsody have an anti-commie theme but it also presents pro-family and pro-American values too!

Wow! Here is the synopsis from IMDb...

In 1950, a Hungarian couple, Peter and Margit, are forced to flee from the oppressive communist country for America with their eldest daughter Maria, but are forced to leave behind their infant daughter Suzanne who is raised by kindly foster couple. 6 years later, Peter and Margit arrange for the American Red Cross to bring Suzanne to their new home in Los Angeles where the perplexed youth is forced to accept her sudden change in home and country which leads to a troubled growing up. At age 15, the rebelious and unsure-of-herself Suzanne tries to come to terms with her roots and decides to travel back to Budapest, Hungary to find her true identity.

Here is the trailer!

what would I do without u!..thanks!..HAPPY HOLIDAYS my friend!..:)

Into the queue it goes.

Whether there are analogues?