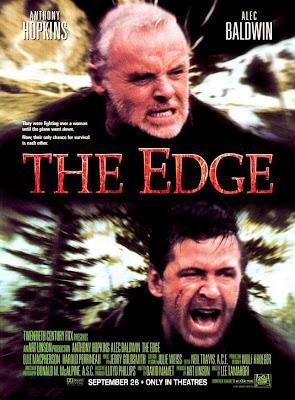 No, I didn't post The Edge as the Edge Conservative Movie of the Week because of my name.

I posted the film because so many people have asked me to watch it! I finally did, and folks it did not disappoint. It ranks right up there with the other "survival" movie I reviewed earlier Island in the Sky.

And wouldn't you know it? National Review has listed The Edge as a conservative movie too (even if it does star Alec Baldwin).

Here is the review from National Review writer Michael Long who is also a director of the White House Writers Group.

Screenwriter David Mamet uses a wilderness survival story about friendship, betrayal, and forgiveness to present a few truths rarely seen in movies: Knowledge has its limits, fortitude is a weapon against hardship, and honor can motivate even the shallowest man to great sacrifice. Some have interpreted the film as a Cold War allegory because it features a menacing bear. The main characters (played by Anthony Hopkins and Alec Baldwin) understand that there is neither wisdom nor nobility in waiting for others to save them, and that they must take responsibility for their own lives and souls. Life is unfair, but to challenge life on its own terms is an exhilarating reward, no matter the outcome.

Putting your differences aside to fight a common and deadly enemy makes The Edge the ECM Movie of the Week!

"...understand that there is neither wisdom nor nobility in waiting for others to save them."

That jumped out at me..as if Baldwin doesn't believe THE ONE has to save America, right? Well, maybe he learned something making this movie. naaaaaaaa, what AM I THINKING?

I'm not an Alec Baldwin fan. But I LOVE Anthony Hopkins's work.

I just added this to my NetFlix queue and bumped it to the top. I may have seen the film before, but I think it's worth watching again.

Thanks for the recommendation.

I saw the movie, it was a good one. I'm not crazy about Baldwin, but he does a good job acting. Always enjoy Anthony Hopkins.

of course dude they named it after u!..hugs!

Thanks, Edge. I'm adding it to my NetFlix queue too. I won't refuse to watch it because Baldwin is in it. If I refused to watch liberal actors I'd have to stop watching movies altogether! I watch 24 and I think every actor on 24 is a liberal. I guess their money is far more important to them than their politics. :)

Of course not. And I don't consider CUBE an excellent scifi film because of its eponymous title either ;-)

My friend AM86 at random Acts of Patriotism said it best...

Baldwin is playing a sleavzey, backstabber...which I guess isn't too far from his own character."

Why do you call yourself Cube? Just wonderin'?

Yeah, not likin' Baldwin so much... But I will watch this!

He plays a whiney weiney of a man...kinda of like real life huh?

LOL! Does he scream at any little girls in this one? ;)

I was hoping Sarah Palin would take Baldwin out in the movie. They are in Alaska you know? :O)

Best line in the movie:

I try to stay away from those bitter and murky chicks as much as I can.

Edge,
Just letting you know that I rented the film and loved it!