Transformers 2: Revenge of the Fallen (Paramount 2009) 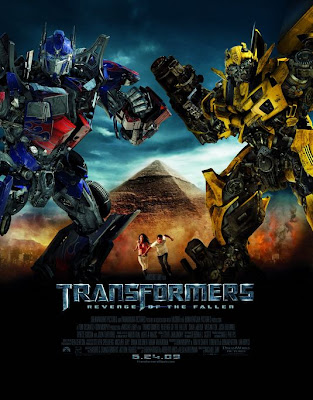 Just saw this Saturday and if you like cars, Megan Fox, robots, Megan Fox, stuff blowing up, Megan Fox, and guns you should be OK with Transformers 2: Revenge of the Fallen. I did not intend originally that this film be the Movie of the Week, but there are a fews scenes in particular that made me grin.

In the movie it is stated that Barack Obama is President of the United States. Not a Hollywood president. Not a fake president. Obama is the president. As a matter of fact, his image is in the film but only for a few seconds.

So I said I to myself in the theater OK, I'm sure there going to make Obama the supreme kick ass leader everybody HOPES he is right? Wrong. Instead the writers (perhaps without knowing it) made Obama appear weak and uninformed on military issues.

In the story the Autobots (the good robots) are the only HOPE for mankind's survival against the Decepticons (the bad robots). According to the story, for the last two years, the humans and the Autobots have teamed up to defeat the Decepticons (as a matter of fact George W. Bush was portrayed in the first Transformers moive). But now a new threat has evolved which will spell doom for the entire planet. Cities around the world are being destroyed, lives are being lost and evil is winning.

So what does the President BARACK OBAMA do? He sends a nerdy paper-pushing White House bureaucrat to bust up the Autobot-Human fighting force (below on left). I believe this character in the film used terms like this is not our fight and the reason the Decepticons are here is because of you (Autobots) and they mean us (humans) no harm.

So the Autobots pack it in. Because they understand that this is not their planet they agree to leave peacefully. And basically...we're screwed...BIG TIME. Will the Decepticons win? Will the Autobots save us from...President Obama's idiocy?

It might help if you watch the first Transformers movie to get ya' up to speed. Not sure if it's a good idea to bring the kids to see this. Some strong language in the movie.

Yeah, but is Megan Fox in it?

I won't be watching.

Glad I discovered you. My husband and I both need a place where we can find conservative movies. I'm not much for heavy action films but he is, so thanks!