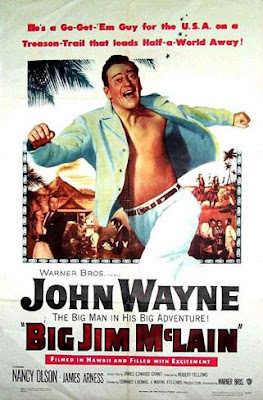 To my father, politics are very simple. If the Democrats are for it, he must be against it. If the Democrats are against it, well...then he must be for it. Sometimes this formula works well in picking out films with conservative themes too. And if ever there was a movie a lib would love to hate, may I introduce you to the 1952 classic Big Jim McLain.

John Wayne plays McLain, a tough as nails US House of Un-American Activities investigator sent to Hawaii with his partner Mal Baxter (James Arness) to bust a crime ring run by Communists. Al Napier (Alfred from Batman) plays the role of the red-ringleader, Sturak. In the story, McLain falls for Nancy Vallon, played by actress Nancy Olson, who helps the Duke find information about Sturak and the Commie's evil plans.
I'll be the first one to admit it, this ain't John Wayne's best film. Wayne claimed that the movie helped re-elect Joe McCarthy to the Senate in 1952. Of course, the McCarthy hearings were soon to follow and innocent American lives were destroyed. If there was a lesson learned from McCarthyism, it should be the fact that always trusting your friendly government is a BIG mistake. I can't dispute that this was one of the most unfortunate and embarrassing times in our country's history.

However, I also believe Big Jim McLain is an important conservative film because it does spell out who the bad guys are...da' commies and Wayne's character must defeat THEM!

Over time we have allowed the word McCarthyism to become a battle cry for our most dangerous enemies whether it's communists or terrorists. It has given THEM the ability to maneuver and plot against the very freedoms we all hold so dear. Instead of stopping an enemy dead in his or her tracks, today we have politicians, educators, and entertainers that basically say, "Yep, they have the right to kill us all!" Now, some libs will call this paranoia, I call it a fact and I can find a list of over 3000 dead Americans to prove it! 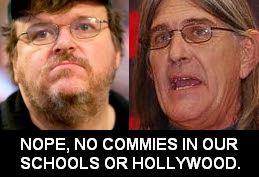 As I mentioned before this isn't a great film. The extras who were told to act natural seemed more interested staring into the camera. However, when you finish watching the movie, especially if you're a conservative, you have to smile and say, "Damn, why can't they make a movie like that anymore?"

Here are some other interesting facts about Big Jim McLain I found on-line .
Nancy Olson hated the script but she figured six weeks in Hawaii and a chance to work with an icon like Wayne seemed a good enough reason to accept. Besides, she thought the film would flop and nobody would see it. She didn't count on the constant TV exposure the film has had and says people stop her all the time to say they've seen her in the film. Olson, a staunch liberal Democrat, said she and Wayne would often have political arguments but she would always let Wayne have the last word.

The German title is "Mathuana". In this dubbed version for the German market John Wayne plays a hunter of drug smugglers, not an investigator for the Un-American Activities Commitee as in the original film.
The first film produced by Wayne-Fellows Productions (later renamed Batjac Productions), John Wayne's independent production company.

Unfortunately, I could not find any clips from Big Jim McLain on YouTube. But never fear! Here are a few John Wayne clips I think you will all enjoy!

John Wayne, America...Why I Love Her!

Every now and then I go over and visit John Wayne's grave, in Newport Beach. I just sit there and talk to him for awhile, mentioning my favorite movies of his and so forth.

I'm probably crazy, but I feel better after sitting there for a spell, under the trees, thinking how great a country we have, and how lucky we are.

Have a great weekend!

Hi Donaild! Thanks for the visit and the comments! I've never had the opportunity to make my way out west, but some day I hope to! I 'll be sure to check out your blog when I have a chance! The Duke was one of my favorite actors, and I don't think we have anything like him today that comes close! Your right! We live in the best country on the planet! If you love Wayne I know you'll love this movie! Yah, it's kind of corny at times, but the message it clear...American is the good guys and must destroy the bad guys. Thanks again for the visit!

The DUKE is great, and there's not a movie of his I wouldn't watch.

One of my favorite scenes is the way he treated the newspaper man in "The Shootist."

Now there's a man who knows how to treat a member of the 'drive-by media!' LOL!

You're right! The Shootist is a classic, Brooke! I will have to keep that one in mind for the future!