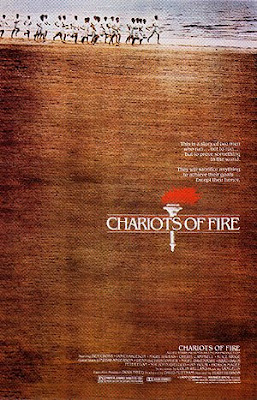 Here is the movie review I found on Wikipedia...

The movie is based on the true story of two British athletes competing in the 1924 Summer Olympics in Paris. Englishman Harold Abrahams (Ben Cross), who is Jewish, overcomes anti-Semitism and class prejudice in order to compete against the "Flying Scotsman", Eric Liddell (Ian Charleson), in the 100 meter race.

In 1919, Abrahams enters Cambridge University. He attempts and succeeds at the Trinity Great Court run, which involves running around the court before the clock finishes striking 12. Meanwhile, Liddell sees running as a way of glorifying God before traveling to China to work as a missionary. He represents Scotland against Ireland, and preaches a sermon on "Life as a race" afterwards.

At their first meeting, Liddell shakes Abrahams' hand to wish him well, then beats him in a race. Abrahams takes it badly, but Sam Mussabini (Ian Holm), a professional trainer that he had approached earlier, offers to take him on to improve his technique. However, this attracts criticism from the college authorities.

Eric's sister Jenny (Cheryl Campbell) worries he is too busy running to concern himself with their mission, but Eric tells her he feels inspired: "I believe that God made me for a purpose... (the mission), but He also made me fast, and when I run, I feel His pleasure."

Despite pressure from the Prince of Wales and the British Olympic committee, Liddell refuses to run a heat of the 100 meters at the Olympics because his Christian convictions prevent him from running on Sunday. Liddell is allowed to compete in the 400 metre race instead.

This is a great film about faith, courage, and sacrifice I think all will enjoy!

Here is the movie trailer...

Thanks... Now I'm going to have that theme stuck in my head FOREVER! LOL!

Maybe when you are at work or run errands it will make the day go faster? :o)

i've never seen this movie, although i love the soundtrack - it is a favorite amongst my old snowskiing buddies of yore...

This is my favorite movie of all time.

Eric Liddell is a true Christian hero and athlete.

No one from Scotland had ever won a gold medal before. He not only won the race (400 meters)but broke the existing world record with a time of 47.6 seconds. A few days earlier Liddell had competed in the 200 meter finals, for which he received the bronze medal behind Americans Jackson Scholz and Charles Paddock, beating Harold Abrahams, who finished in sixth place. (This was the second and last race in which these two runners met.)

He eventually ended up in China working as a missionary.
When the fighting reached Shaochang the Japanese took over the mission station. In 1943, he was interned at the Weihsien (now known as Weifang) Internment Camp with the members of the China Inland Mission Chefoo (now known as Yantai) School. Liddell became a leader at the camp and helped get it organized. Food, medicines, and other supplies ran short at the camp. There were many cliques in the camp and when some rich businessmen managed to smuggle in some eggs to the camp, Liddell shamed them into sharing them with the rest of the camp. Fellow missionaries were forming cliques, moralising, and acting selfishly. Eric kept himself busy by helping the elderly, teaching Bible classes, arranging games and also by teaching the children science. He was known to the children as Uncle Eric.

Later, Winston Churchill approved a prisoner exchange and Liddell was one of the prisoners chosen to go; however Liddell, unsurprisingly, gave his place to a pregnant woman.

In 1945, he died on February 21, sadly five months before liberation, as a result of a brain tumour, to which being overworked and malnourished probably hastened his demise. He was interred in the Mausoleum of Martyrs in Shijiazhuang, China. He was greatly mourned not only at the Weihsien internment Camp but also in Scotland as well. A fellow internee, Langdon Gilkey, was later to write, "The entire camp, especially its youth, was stunned for days, so great was the vacuum that Eric's death had left." Liddell's last words were supposed to have been "It's complete surrender."

In 1991, a memorial headstone, made from Isle of Mull granite was unveiled at Liddell's previously unmarked grave in Weifang, erected by Edinburgh University. A few simple words taken from the Book of Isaiah, formed the inscription: "They shall mount up with wings as eagles; they shall run and not be weary." The city of Weifang, as part of the 60th anniversary of the liberation of the internment camp, commemorated the life of Liddell by laying a wreath at the memorial headstone marking his grave in 2005.

What an incredible story and thank you for the post! I didn't know that much about his life as a missionary.

it's said that when he died that all of Scotland mourned.