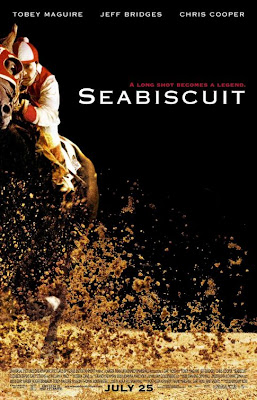 Great film folks! I think all of you will simply enjoy this true story. If you haven't seen it yet be sure to rent it soon! There is a great conservative message in this film of hard work, optimism and faith! Here is the movie review from About.com!

Seabiscuit takes place during the Great Depression, a time when Americans got their news and entertainment via the radio. With the country in the midst of one of the harshest periods of our history, people needed something inspirational to lift their spirits and give them hope. They found that hope in the most unlikely of heroes – a ragtag racehorse named Seabiscuit.

Short in stature and with a quirky gait, Seabiscuit passed from owner to owner, picking up various labels including lazy, unmotivated, and a loser. By the time he was purchased by automobile dealer Charles Howard, he’d become difficult to deal with and was on his way to being put down. Wrangler Tom Smith spotted a kindred spirit in the stubborn little horse and convinced Howard to give him a chance to work with the animal. Howard had suffered a devastating blow when his only child died in an automobile accident and was looking for anything that might distract him and help fill a gaping hole in his life. New to the horseracing industry, Howard placed his faith in Smith’s judgment and Seabiscuit found a home.

Tom Smith was also responsible for hiring a jockey to work with Seabiscuit. Johnny ‘Red’ Pollard caught his eye while berating a horse he was working out. Red was tall for a jockey but similar to Smith, Howard, and Seabiscuit, Red had that down but not out attitude.

Like the men who cared for him, Seabiscuit overcame the odds and blossomed. With the team in place, Seabiscuit became one of the winningest horses of his generation, taking on all challengers including the then current Triple Crown winner, War Admiral.

It's great to see the little guy win one every once in awhile, isn't it?

Here is the trailer from the film...

The actual 1938 race between Seabiscuit and War Admiral.

Awesome Huck would make a good president, not as good as I think Hunter would make. But Hunter has no chance in hell :(....

Guliani would be my least favorite on both sides.... slimy creepy little man

Right with you Oscar! I like Hunter, Tancredo, and Thompson too, but Huck's my guy!