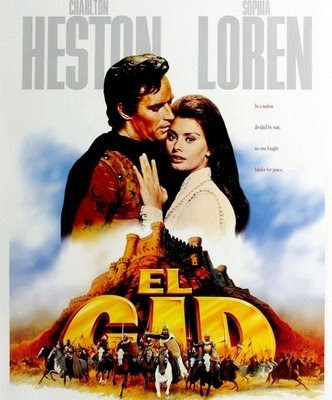 Well, it's about time for ECM to post another Charlton Heston movie don'tcha think? (the last was Ben-Hur.)

So, why exactly did El Cid make Edge's Conservative Movie of the Week? Well, here's the plot.

Need more? Below is an intersting comment a user at IMDb made about the film!

"Although generally regarded as "good but not great", I consider "El Cid" to be the best film ever made.

The film always flies past for me, no matter how many times I've seen it and is virtually perfect. Each character is memorable and well-acted (with the possible exception of Sophia Loren's Chimene) - stand outs are Heston, Genevieve Page as Uraca, John Fraser as Alphonso, Gary Raymond as Sancho and Raf Vallone as Ordonez, but the all the supporting roles are performed with conviction.

Amongst the many other plus points are the exciting action scenes, in particular the combat for Caloharra, which, although the viewer is never in any doubt that Rodrigo will be victorious, is superbly performed and totally convincing. Also, Miklos Rosza's impressive score ranks amongst his very best.

"El Cid" has never been given the praise it deserves, often being over-shadowed by (the admittedly excellent) "Ben Hur". Perhaps this is down to personal taste as most critics and viewers would disagree, but I think "El Cid" is just marginally superior."

Here is the trailer to El Cid!

Still not sold on El Cid? Here's some clips!

Edge..your comment from Forrest Gump killed me at the blog! Leave it to you to come up with a MOVIE LINE ANSWER! BRILLIANT!

I'm applauding here....ya hear me!? you're one clever guy, edge!

Love both actors and all their movies. But "MOSES, MOSES, MOSES...", The Ten Commandments, has to be the best.

I noticed your weapon of choice in the sidebar. Hubby and I both carry Taurus 38's, but we have other too, like Rugar 9mm, et al.

Thanks, Edge. I saw this movie a long time ago, but have forgotton most of it. I have written it down and will add it to Net Flix. Thanks! You're the man! :)

i'm going to have to see this again...you know...since my alter ego sophia is in it...

I rented El Cid a few months or so ago. I recommend it as well.

I remember watching this in Spanish class one year.

It's in my queue to see again.

"Clever guy." That's not something I get called very much! Thanks!

!0 Things I Hate About Commandments

Yah, check it out again! It's cool!

I always pictured you as Sophia Loren!

I tried to find it at Blockbuster but they didn't have it so I went to Netflix! Do you have that?

What was you Spanish name? Mine was "Juan."

Mine was Elena, from my middle name Elaine.

Sophia is so gorgeous...and she has aged extremely well IMO. Was it ever any question that Charleston was conservative back in the day! I mean really. This looks great, I will look it up! :)N

Apparently Heston was supposed to campaign for JFK while this film was being produced but he could not due to travel! Of course back in 1960 the Dems were a VERY different party than they are today!

Edge,
Yes. I have netflix. I've never tried blockbuster, do you like it?

Never tried their on-line stuff before, just their regular stores. I have two where I live plus a Hollywood video and nobody had El Cid. Think I'll stick with Netflix!