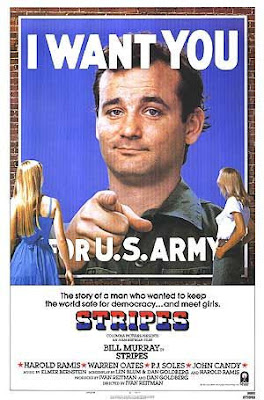 So I'm having lunch today talking about my blog and my buddy brings up the movie Stripes and then it hits me! THAT'S IT! That should be the Edge Conservative movie of the week! I mean where else do you hear lines like this...

We're all very different people. We're not Watusi, we're not Spartans, we're Americans. With a capital "A", huh? And you know what that means? Do you? That means that our forefathers were kicked out of every decent country in the world. We are the wretched refuse. We're the underdog. We're mutts. We're soldiers, but we're American soldiers! We've been kicking ass for 200 years! We're 10-and-1!

After losing his job, girlfriend, and apartment John Winger (Bill Murray) feels that he needs to reevaluate his life and get back into shape...and he thinks the military has all the answers. So he convinces his friend Russell Ziskey (Harold Ramis) that they both should join the United States Army.

Thinking this experience will be like a few days at a health spa, the boys instantly cross hairs with the crusty Sgt. Hulka (Warren Oates). Unfortunately for Hulka he has his hands full with other screw-ups in the regiment such as Dewey 'Ox' Oxberger played by the late John Candy. Murray's character eventually becomes the unofficial platoon leader and leads the misfits to a memorable graduation!

Oh and did I mention they kick some Commie Red ass at the end? Good flick, if you haven't seen it, rent it!

Oh and did I mention they kick some Commie Red ass at the end?


That would make me go to see it! LOL